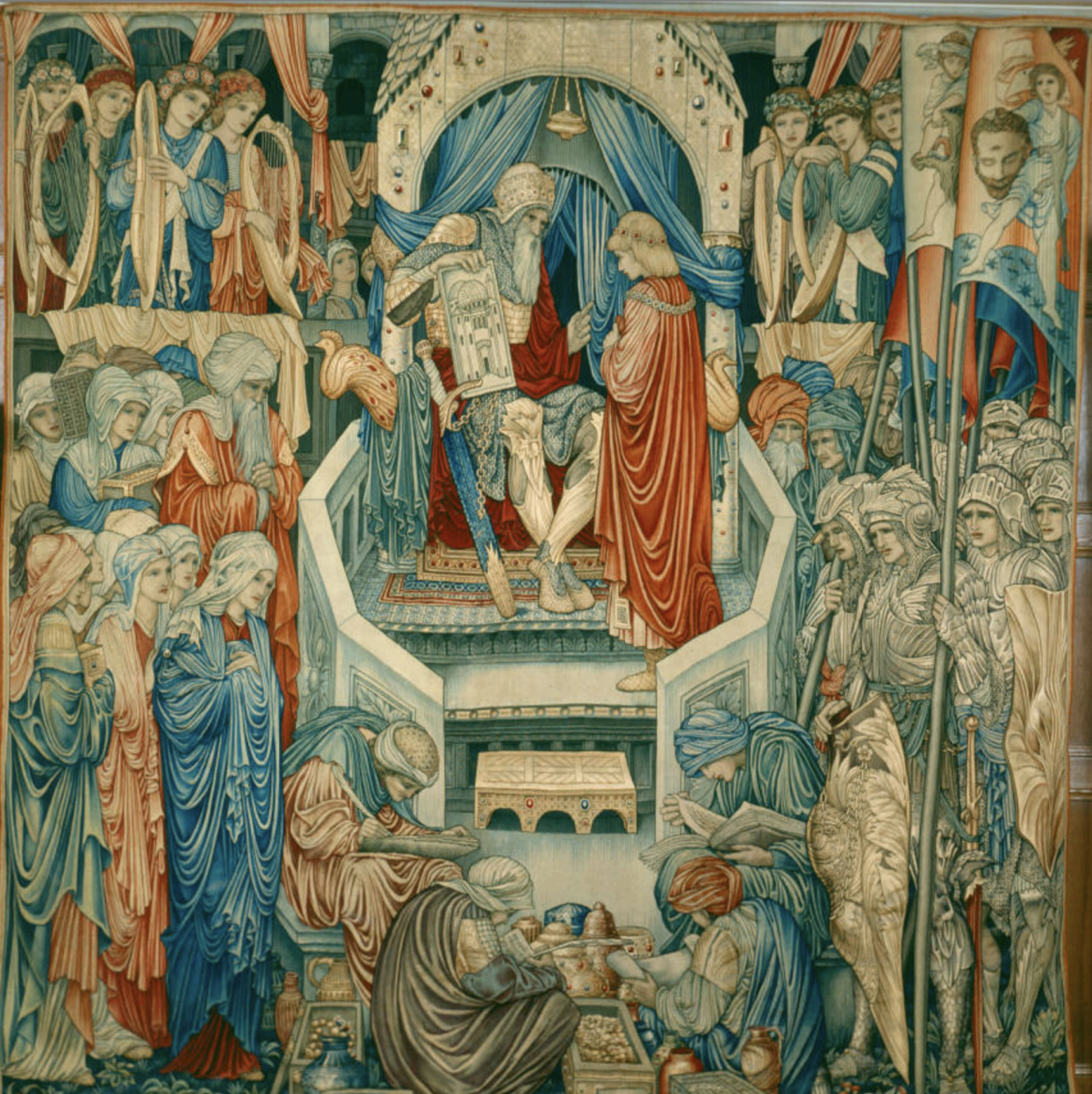 Founders’ Day – 9/25/2022 This sermon has been transcribed from a live video. To view a video of this sermon, please click here.

My family on my mother’s side were immigrants from Italy. And that means that we know a lot about money. Money is everything in my family of origin. Before there had been anything like an investors club, we had our kitchen table where we would have kind of a whole round table on stocks and investments. It was key to know how to manage money. And I remember the moment in the early 1990s, where I finally piped up in the conversation and I said to the family, “You know, we should invest in Apple. I think it’s going to turn around.” And they just shouted me down. And my mother to this day will occasionally pull me aside and say, “I’m really sorry about not taking your advice about Apple. That was the mistake of a lifetime.”

Money is important. And money is something that we can do a lot of good with so long as it doesn’t occupy the center of our attention. And I’m not just talking about the charity we do, which is incredibly important, or the sacrificial giving we give to the church or to other organizations that matter to us. Just running a business fairly and well is its own social good. And I’ll never forget the moment when my grandfather, who had built a contracting business, went with me to get some gravel. And we were doing a project and this man climbed off his bulldozer and crossed the yard and came to my grandfather and said, “Are you Mr. Zoli?” He said, “Yes.” And he said, “I want to shake your hand. You gave my father a job in the depression.” So money can do good things so long as we treat it well.

I’ve always been fascinated with money, kind of unusual for a priest, maybe, maybe not. And this summer I decided to do something unusual. It was a longstanding dream that I had, and that was, I decided to apply to the University of Michigan and to get into their executive MBA program. And stunningly, I was admitted. And so in July, my wife, Claire packed me into the car and I went off to my first week-long residency, which entailed getting into the little dorm room there and having Claire kind of make my bed and say goodbye and tell me to make friends. It was such a lovely regression as we all do in marriage at different points.

And on our way there, I suddenly had this really strong feeling. I was terrified. I had gotten some of the quantitative work that I had to do ahead of time. And I had not been in school since 1999 when I finished my PhD. The last time I had a math class, it was 1986. Before most of you were born. And I was terrified. When you’re in your late fifties, it’s always exciting when you feel something strong, you’re kind of like, woo! Oh, I feel happy! Woo! Oh, look at that, Michigan won unexpectedly! All of these things, but this was not that kind of feeling. It was terror.

And I was afraid because I was 57 years old. The average age in the program was 40 years old. I had not been in school for a long time and I didn’t know if I could cut it. I almost said to Claire, turn around, I can’t do this. And then I picked up my phone and I looked up my father’s obituary. My father was not a businessman. He was an airline pilot and he had a colorful life. There were times when my father was present and there were times when my father was absent. There were things my father did, and there were things he left unfinished in his life. And yet, as I read that obituary, I found myself comforted because I realized that though I had a far from perfect father, he was willing to change in his life. And this continued throughout his life. When he was 28 years old, he confronted his alcoholism and he went to AA and he got sober, which was an early thing to do in those days. Back before rehab was cool, he confronted his disease and he changed.

And later in life, after hanging in with a marriage that sometimes was less than happy, he dedicated himself to returning the love that my mother had given him from the beginning. His major work in life was to return the immense love to my mother that she showed him. And in his life, my father who had many chapters and many experiences became, as he said, unexpectedly religious. And he began to cultivate a spiritual life. And that was truly surprising and beautiful.

And before he went into a major challenge in his life, a challenge he took on, a time when he was afraid, my father began to pray. He had decided to move into more sophisticated equipment. And my father had learned how to fly back when the instruments were behind glass and he used to have to flick the instrument panel to make sure the needle didn’t get stuck in the humidity. And he had to learn a digital system in order to fly the 767 and he was terrified. He told me about a moment when he was trying to reconnect with me where he prayed before his final flight test. The instructors who were with him said to him, “We’ll pray with you. You’ll get through this.”

And so at a time in his career, when my father would’ve quite easily given up or stayed where he was, he took a chance. He took a risk. He decided to risk that change that happens. And I found this to be an incredible comfort to me because I was in the midst of taking a big risk. And I thought of my father a lot over the course of early parts of this program that I’ve been completing. It’s going well, but more importantly, I became grateful that I had my father in my life. My grandfather was ballast and he held me together and he was always there, but my father taught me how to change. And change has been one of the things that I’ve had to do in my life and one of the things we have to do in the Christian life.

And the wise among us are those of us who can reconcile with our past so that our present and future becomes something more than we might otherwise have it. And my father helped me, even though he had been dead two years, become more of who I believe God has called me to be. And on this day, in which we celebrate the founding of this church, it’s important for us to remember that what this church symbolizes is not a pristine past, that we have never been able to repeat, but rather a past that has become part of our present and part of our future. Because there was a time when this church began as a fledgling affair, full of anxiety and fear by people who were past their prime.

When George and Ellen Booth celebrated the consecration of Christ Church Cranbrook in 1928, they were 64 and 65. Booth had already tried to establish an idyllic farm and it had failed. And then he tried a school because he reasoned that a school was easier to run than a farm, and the school flourished. And then he founded a church with his wife, Ellen by his side, and in fact, leading him at different points. They took on this great project when they were at an age when they might have sat back and not challenged themselves. Hmm.

Samuel Marquis, the first rector of Christ Church Cranbrook. When Christ Church Cranbrook became a parish, Samuel Marquis was 62 and he had already settled down in retirement at St. Joseph’s on Woodward Avenue. Marquis had worked for Henry Ford and founded what we now know as human relations at Ford. Marquis had built two churches. He had been hired and fired. He knew what it was like to be inside a factory. He had an incredibly foul mouth, and I love him because I know there’s hope for me.

Marquis took on the founding of this church at 62 and he served it until 1939 in which he had to retire because of ill health is what the history writes. People, he was 73 years old in 1939! He didn’t have any of the medications you and I have to keep our veins clear. He was 73 years old! He should have been able to retire then. But no, he retired because of ill health is what the histories say. He was an old man, but Marquis decided, as Theodore Roosevelt once said, that it’s better to wear out then to rust. He changed.

And as you and I contemplate the work you and I have to do as a church, we have to give thanks for our past, for the fact that George and Ellen Booth decided that they were going to die penniless. And they put everything into this church and bought life insurance so that their heirs would have something to live on, which was actually quite a substantial sum because obviously the actuaries were early on in their career in those days. But they gave this church everything because they were wagering on the future, on the future that is ours.

And all of our readings today are about the past and about money and about the future. In our reading from Jeremiah, Jeremiah buys a plot of land, even though the nation is collapsing, he decides to go forward and to buy a piece of property. And he puts it in a safe place, in a jar, in a ground so that he could be there, and that that promise that God had given that land to the Israelites would be fulfilled.

And in our reading from 1Timothy, we have an incredible, sensible, wonderful, practical advice that we should not let money get in the way of who we are as people. That when we get gifted with money, we should see ourselves as somehow knit together even more intimately with others. And so Paul gives incredible practical advice to the rich. Do good, be rich in good works, generous, ready to share and store up for yourselves treasure of a good foundation for the future. Money helps the past move into the present and into the future.

So then if that is the case, what is the point of the parable? Simply this: to understand and to learn from your past. If they have Moses and the prophets, they have enough, they will not be persuaded by even someone who has risen from the dead. And so the opportunity to respond to the gift of God’s love in Christ, to be transformed, to let their whole selves be changed and to give their money gets missed.

What is your past? What is the past that you live in today that is part of you? What change does it invite you to make in your life and what future is God calling you to?