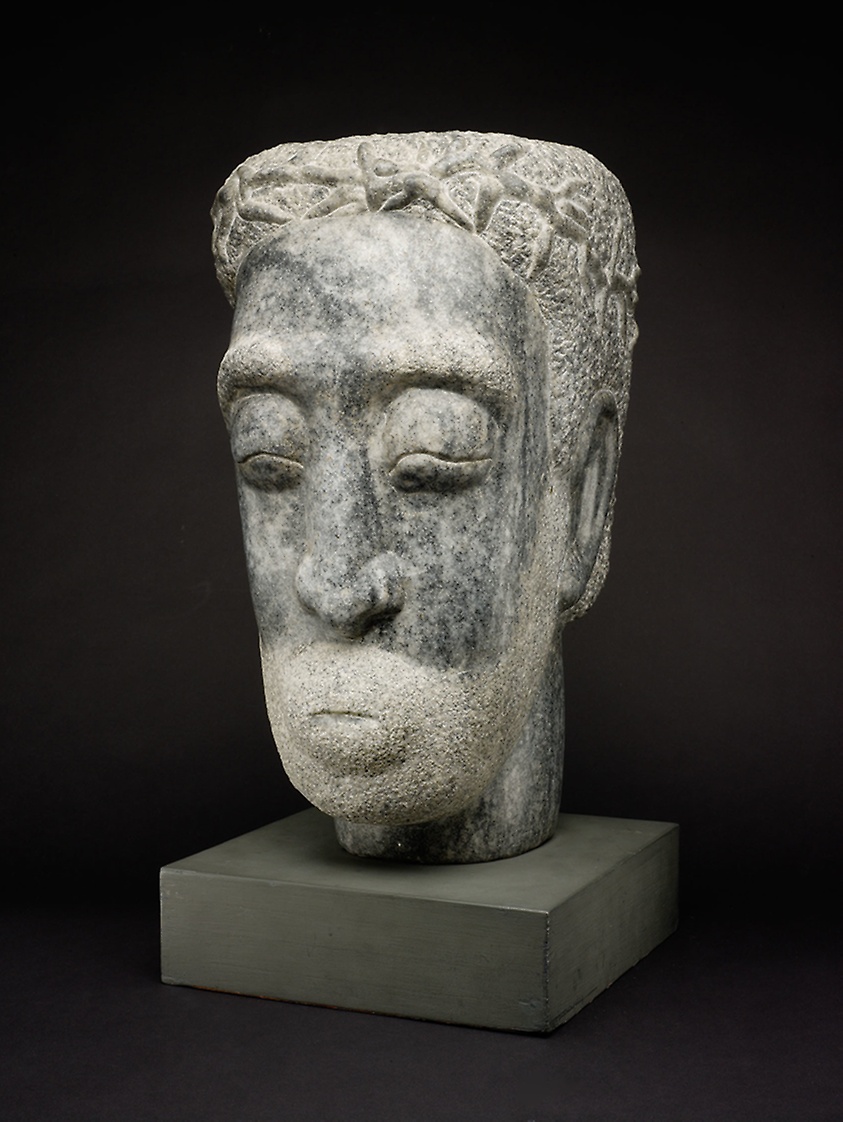 Do not let your hearts be troubled. Believe in God, believe also in me. In my father’s house, there are many mansions. If it were not so, would I have told you that I go to prepare a place for you? Whoever has seen me has seen the father.

And these words hit us again in this place and this time. And in doing so, we follow so many generations of Christians in which we believe and hold onto that promise from Jesus to not let our hearts be troubled, to believe in God, to believe also in him, and to look for God through the face of Christ.

And from the beginning, these words of Christ have come amid chaos, and they’ve come as a kind of promise of not just order, but somehow reconciliation. So Jesus gives this incredible promise in the gospel of John after Judas has left to go betray Him, and right before He goes and is lifted up on the Cross. So Jesus gives these words in the gospel that we read today as He is in the midst of undergoing His own transformation, His own journey to death and resurrection.

And yet He promises that no matter what happens that He will be with His disciples and they will be with Him. So they should not let their hearts be troubled. They should believe in God, believe also in Him, and trust that the god they worship has been revealed in full in the face of their Lord.

The first artwork that I have for you today is an early example, perhaps the earliest we have of a kind of way of depicting Christ. This is from the late 12th century, is from the Eastern Orthodox church, which was at that time, part of the Byzantine Empire, and it’s a depiction of God, not as powerful. Not as someone who has incredible glory and authority around him, but rather whose authority and glory comes through the fact that this god suffers.

And so this depiction of Christ, which is known to us in the West, is Christ the Man of Sorrows came to us as a kind of promise of connection, as a promise of compassion. And as an invitation to imitate this God who comes to us, who shows His face to us as one who knows and tastes suffering and death.

This image of Christ came to the West shortly after 1204 when the Western crusaders sacked Constantinople and took this image with them and brought it to the West, and it suddenly set religious imaginations on fire. And so in the midst of conflict, in the midst of a social breakdown, in the midst of incredible animosity, and one might even say civil war, this image of Christ comes and provided to the church at that time an assurance that despite all the ways that they had gone astray, that God still loved them, that God’s compassion was infinite. That looking upon the face of Christ was a way of looking upon the face of God and that in Christ God had revealed His basic nature, His ultimate nature, which is to be a God of compassion, a God who is willing to suffer with us.

That is the root of the word compassion, compassio, to suffer with. And even though this image had been stolen, it somehow remained a blessing. The people who had somehow betrayed that covenant with God, they could rest and see that that covenant was unavoidable because it had been sealed with the blood of Christ. And the sorrows they were experiencing were not sorrows that they experienced alone for Christ was with them just as He was with His disciples, as we read today in the Gospel of John.

And so ever since the image of Christ, the Man of Sorrows has been a counterpoise to our tendency to lift up images of power and authority when we think about our Lord and Savior Jesus. And this counterpoise, this correction in some ways represents the deeper mysteries of God. For there have been times, of course, when the church has come out in power and glory, but the most important thing for us to do as Christians is to trust in that God who comes to us as compassionate and as all-loving, all-merciful, all-knowing, the God who understands each of us fully in Christ and forgives our sins fully through His Cross.

And from the beginning there was a message that this image seemed to instill in its believers and viewers. It was meant to convey this incredible intimacy. There is a diary that was written just shortly after this image came to the West in which a pilgrim saw it in a cathedral, and she said that looking upon the face of Christ, it was this moment in which suddenly it was if that face was imprinted on her soul and stayed inside of her so that wherever she went Christ went with her.

And there were two practices that Christians were meant to do when they saw this image. One was to kind of enter into prayerfully what it meant to experience God’s compassion. And this was described by the Latin compassio. And the second was to think about how they could go with the grain of that compassion in their own lives. In what way could they build their capacity for compassion, in what way can they allow the compassion of God to flow through them? And they called this practice immitatio or imitation. So compassion and imitation, were the spiritual disciplines that Christians had to do to make sure this image of Christ was imprinted inside of them so that Christ truly lived in them and they were Christ in the world around them.

And the other piece of art I have for you today, it’s a little bit different. It’s a modern piece from 1950. And where this piece of art had been used ritually before anybody would ever look at it in a museum. This piece began its life in a museum. It was carved by an incredible carver from Chicago named Marion Perkins, and Perkins was someone who grew up in poverty, an African American who did not have access to formal education.

And yet taught himself how to carve by carving soap initially and then moving to stone. And the stone he would pick were stones that had been somehow scavenged from different places. Stones which had to gesture towards one of our readings today, stones that had been rejected by builders. And so he began to carve and developed his skills remarkably.

And this piece was a piece that was commissioned after he did a famous installation in Michigan at a resort. The Art Institute of Chicago asked him to carve a stone sculpture that could be in their collection. And so he did this, The Man of Sorrows. It’s done from a piece of scavenged marble, and it’s an incredible piece in that it’s done much like you would see sculptures from the early part of the 20th century sculpt. But there’s also an incredible virtuosity in what he’s done.

The smooth planes of the face of Jesus are incredibly done. The beard is beautifully dappled. The hair is beautifully done, and the thorns on Jesus’s head look more like scars rather than thorns themselves. And it’s tempting for us to maybe see in this a gesture towards primitivism, which many artists were doing at the time, Picasso among them. But what Perkins wanted us to see, and this was the face of an African American man. He wanted us to see Jesus in the face of an African American.

And this Man of Sorrows, this Jesus has an incredible kind of gentleness and power and resignation, compassion, and hope. And you see the movement between the eyelids that he did and the incredible way in which he carved them and the eyelids of this Christ, this Christ is in many ways just as powerful as the Christ that we have here.

And it’s significant to me that Perkins, who was himself an activist, who worked for civil rights before it became popular to do so, Perkins begins his first witness to the wider world by showing us a picture of an African American male as Christ, the Man of Sorrows. Because I think at that moment. He was hoping to invite each of us to see not only this Christ and to find the imprint of this Christ living inside us but to find in the face of this Christ a vision and revelation of God.

And he seems to be suggesting if we go with the grain of spiritual practices that go here, a kind of exercise for the Christ figure here that we would see in that revelation of God an invitation to engage in compassion and to engage in imitation. To understand that in our own prayer life, we need to have our borders of compassion expanded, and to have our ideas of what we can do and what we can’t do to be broadened by the imitation God calls us to do out of our love for Christ and Christ’s love for us.

Perkins’s statue for me in many ways is a kind of way of creating a community of prayer. Just as this incredible first icon created a community of prayer for the world around it, in the midst of conflict, in the midst of screwed up priorities, in the midst in which people tended to value money over people. This first icon was a kind of message and a reminder that the connection that Christians had to one another was deeper than anything that was holding them apart. And the same could be said for this other man of sorrows. It’s a reminder to us, a prayer for us, an invitation for us to see a connection that is wider than we typically imagine, that the face of Christ is to be seen anywhere through the grace of God and that you and I are called to transformation and changed.

Particularly in this day and age in which this pandemic reveals as nothing else seems to have revealed before in the most immediate past, the level of disparities in our country in which African Americans have suffered disproportionately from this pandemic. In a time in which this pandemic has revealed the inequities in our world, this Christ, the man of sorrows, is a challenge for us today to begin to step into a kind of universe of prayer and hopefully to have our prayer translated into action and change.

Today as you give thanks for not only Jesus Christ but for Christ who is the Mother of Souls, as we read in Maximus the Confessor back in the 8th century. And as we give thanks for our physical mothers and everybody who has raised us, may this exercise in compassion and imitation take us into the mystery of God’s love and grace.

May we move into that so that we might be God’s face in this world around us. May we find in each other the face of Christ and so be transformed by grace, and may we work together to repair the divisions in our society. May we work together to find ourselves into a new space led by the Spirit of God.