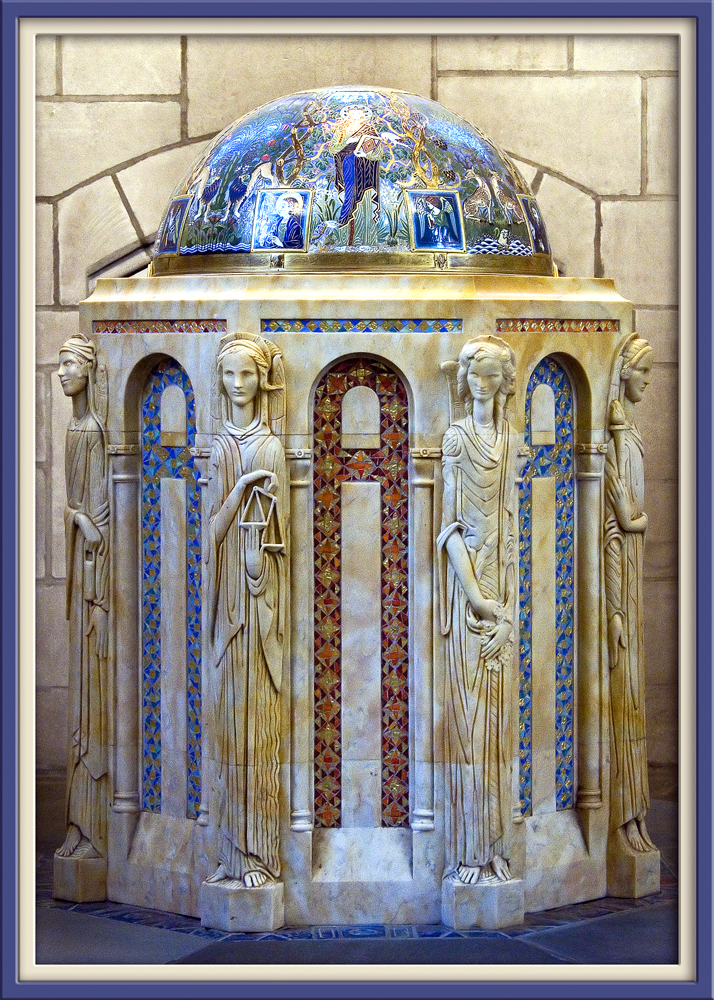 Usually when I have an eventful week, I tend to try to bracket what happened during the week that came up to Sunday and to treat Sunday as its own thing. And that’s because once you get to Sunday, people who are coming are coming for very different reasons than the people who came to church during the week, and you try to somehow create this kind of place in which what they’re experiencing in their lives can be completely on their own.

But this past Sunday, this past week was one in which I feel like I have to speak a little bit about what happened, and this is not something that I had planned to do. This happened last night at the 5:00 PM service when I discovered this little package on my prayer desk and I suddenly realized what had happened over the past week.

Because what happened over the past week is we had a moment in which the church had to step into some space and to welcome and to be a place of healing and transformation for people that needed it who weren’t members of this church. On Friday, right before Epiphany, I was contacted by some friends that I had made at the gym, who happened to have a lot of friends in the congregation but were not really members of the congregation. They would surprise me on Christmas and Easter.

And they contacted me to let me know that their son who is in his early thirties had died by suicide the day before. And I reached out to them and we went and we met and we prayed in the place where he died and we lifted up that space and kind of created a sense of sanctuary in that home. And then things naturally progressed and they asked if we could do the service here.

And so on Tuesday, we did an incredible service of remembrance for a wonderful person named Lex who died by suicide. And hundreds of people were here and we worked in some things that were special to him, and we lifted this family up and we held them in our hands and we offered them and placed them in the arms of God. And we uttered the promises of God, which is that Lex was loved through and through and now is resting secure in God’s arms.

And then on Monday we were contacted by another family who had lost another son but to overdose. And this family wanted to do something different. They wanted to incorporate some of the religious practices that the son had learned while working with Native Americans, particularly the Anishinaabe, which are located in this area, but also in Ontario.

And the church that they were initially going to work with didn’t want to work with them for that and other reasons, and so they contacted us. And again, this was a family that was not connected directly to our, our congregation. They were not members of the congregation, but they were, they were connected through Cranbrook.

But in a moment’s notice, I said yes, and we met with them on Monday and the funeral was on Wednesday for another young man in his thirties. And as promised and what we did, we worked with a Native healer who was known as an Oshkaabewis, which is in Anishinaabe for “messenger.” And as fortune or God’s, God’s Providence would have it, I happened to have spent several years in Ontario, so I actually knew the Anishinaabe and I knew Walpole Island nation, where he came from.

And just before he spoke, I offered him a gift of tobacco, which is what you do as a sign of respect. And he offered me this little package that is a little cloth gift for the privilege of speaking in this place. And again, we lifted this family up and we remembered the loss of this incredibly talented, beautiful artist named Adam. And we honored the promises of God, that God loved Adam through and through.

And now today we find ourselves in the midst of an incredible moment of celebration of baptism in which our new lives in Christ are begun. But I want to bring you through and I want to collapse the division between what we just did when we were mourning to the moment in which we are now celebrating, because I feel like there is a truth running through this that is incredibly important for us each to here, and it’s a truth that runs with the grain of what we celebrate today, which is the baptism of Christ. The moment in which Jesus himself is baptized and the Spirit of God descends and a voice from Heaven says, this is my beloved with whom I am well pleased.

Because as I was preparing for what I wanted to say today, this truth kept coming into my mind. And if you read the Greek and the reading we have today from Acts, there’s the first line where it says, Peter began to speak to them. The actual Greek says, “And truth began to tumble out of Peter’s mouth.” That’s my translation. But it’s, I think in many ways more accurate. So I want to speak to you directly today. I don’t want to engage in any kind of movement around, I don’t want to try to perform new space. I want to speak to you the truth that comes to us from Christ, the promises of God in Christ Jesus.

And to do that, I need you to take a risk with me and to engage in one simple exercise. So if you can, I want you to actually place both of your feet solidly on the ground, and I want you to feel your back against the pew fully so that the pew is right there supporting you and kind of touching almost every part of your spine. And I want you to close your eyes and take three deep breaths.

And I want you to kind of locate that wherever it sits in your body, whether it’s in your lungs or your heart or wherever. Your feet or your head. And then I want you to think about all the things that disappoint you, all the things that cause you to be sad. All of the moments in which you have been less than what you want to be. Or less than your best self. All the things that create anxiety in you. Such as a child getting lost or a relationship that is turning sour or a work experience that is far less than fulfilling, or a moment in which you’re experiencing some profound conflict and it’s bringing out the worst within you.

Because God could have forgiven our sins any way God wanted to. God could have simply snapped God’s fingers, metaphorically speaking, and our sins would disappear. But when Jesus chose to be baptized, Jesus chose to join us in all of our complexity. In all of the things that we want to keep and hide from God, Jesus wanted to be joined with all of who we are as human beings. And Jesus wanted to see that as the place where God’s grace shines. He wanted to be with us. He wanted to be with you and with me and all of who we are.

And you and I oftentimes forget that radical love of God, but it is the promise of God that comes to us in the scriptures. Baptism is not merely a moment in which we are repenting of our sins. It’s not only a moment in which we are moving into new life in the church. Baptism is actually being bound to Christ in His own death and resurrection. And that means that there are parts of ourselves that we resist from God, and that are suddenly brought into relationship with God. And God’s love for us is total. And it’s out of the abundance of that grace when we are bound to Christ in his death and resurrection that we truly begin to see ourselves as surprised by joy and touched by grace.

Every sermon I begin with a kind of formula. I say that I speak as a sinner to sinners. I say I speak as God’s beloved to the beloved of God. I say that I speak as one called to bear witness to those called to bear witness, and that is to recall in so many words, the reality of baptism, because we all have fellowship with one another on the basis of being sinners. Each of us has fallen short. Each of us has things we hide. Each of us has things we would rather not have anybody know about. And yet we are who we are and we’re not hiding anything from God.

And yet each of us are firmly, fully beloved. Because when God said to Jesus, you are my beloved with whom I am well pleased, God said to us, you are my beloved. In you, I am well pleased. And the tragedy of life is that we tend to forget that love. We tend to focus too much on who has a sin or who doesn’t have a sin, and we forget that radical love of God and Christ. And the witness that we are called to give to this world is a witness of the radical, amazing, abundant love for us through Christ Jesus.

And so this past week we’ve had a chance to bear witness. We often talk about being a church that works beyond the walls of the church, and we do that often by serving the needs of others that are immediate and physical. And those are true. But I believe the church becomes what it is called to be fully when it’s that abundant love that flows through us and welcomes all into our midst.

Because at the core of baptism, as we will in a moment notice, is a final covenant. We will renew our covenant, our place in God’s great covenant. But in fact, the power of baptism is that the covenant that we have with God that we made while being a child, that covenant is one that we can never break because God, when God entered it into that covenant, swore by God’s self, and God will keep His word.

So I speak to you today as a witness to those called to be witnesses. What will your witness be in this world? Where can the abundant love of God be shared around with you? And how do you know that that abundant love is for you? What do you need to let go of so that you can know that you are fully loved by God and thereby be the blessing God has prepared you to be to others? Amen.