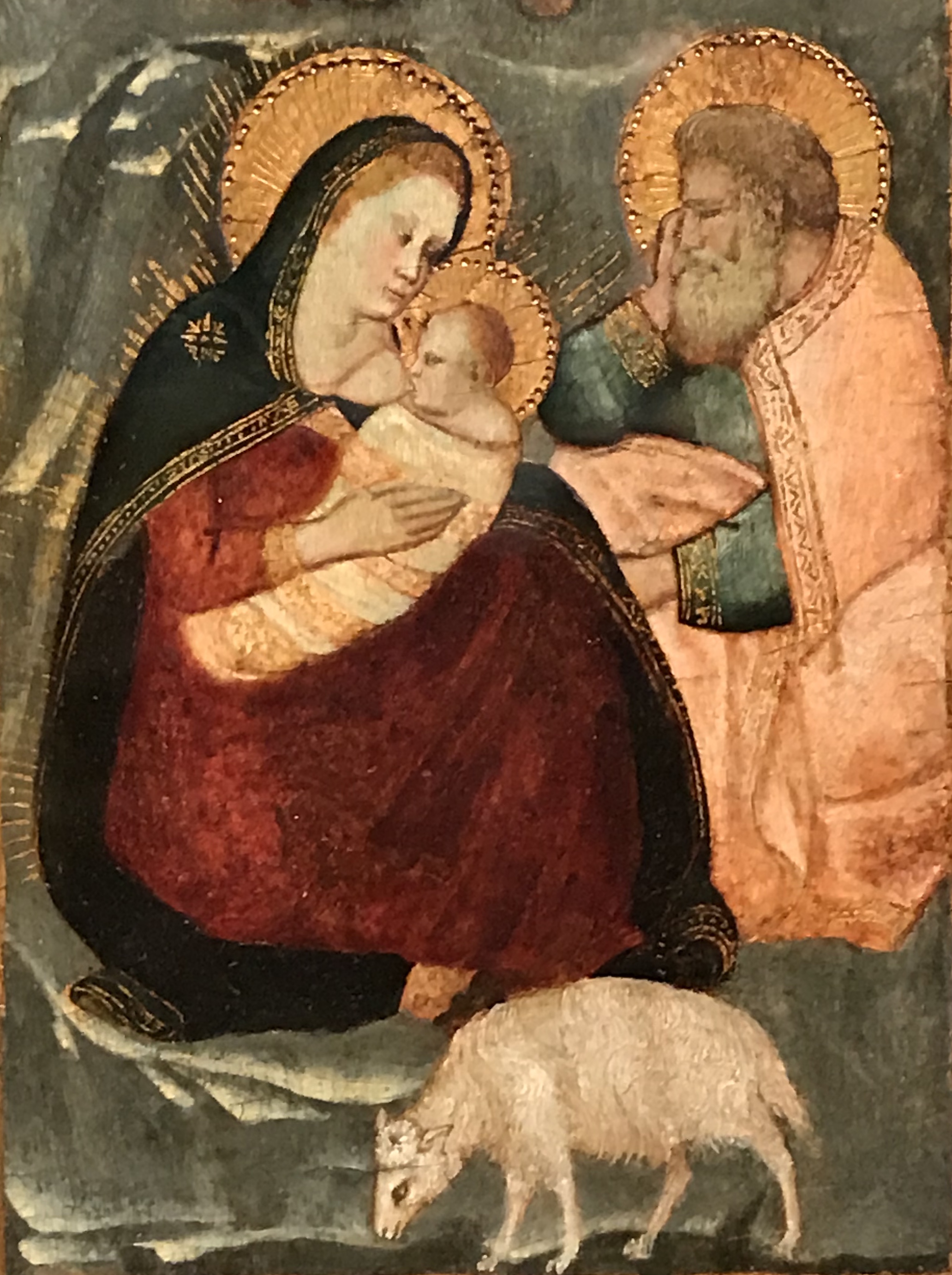 Living with the Christmas Present
One of the great privileges of being a priest is I get to sit and I listen to people when they’re going through times of deep change and challenge. And sometimes I learn during these times of deep change and challenge not only lessons that I can apply to my own life, but also generalizable lessons to life itself, life in general. And one conversation I had with someone a couple of years ago was one such moment.

A man came into my office and he began to complain about how his wife gets obsessed with Christmas, and she wants Christmas to be perfect. And he realized that after years of trying, he could never get Christmas perfect, or something would go wrong – something would happen and then Christmas would be ruined. And he said to me a turn of phrase that stuck in my mind. He said to me, “If unicorns don’t fart glitter, in her mind, Christmas will be ruined.” And it was such an arresting image in my mind.

Now, I have a repertoire of things to say when people complain about their spouses, and this has been built from years and years of psychological study, pastoral experience, and basically, it’s three things. I say, “Suck it up, tell her you love her, and realize you’d be lost without her.” Because I actually think that this is good advice almost anytime. To anybody who’s in a marriage, or in some kind of long-term relationship, there are moments when you have to learn to suck it up, and there are moments in which you have to make sure you say, “I love you,” and there are moments in which you have to realize that you would be lost without your beloved, that she completes you.

Even though I gave that advice at the time, and said the three things I say, suck it up, say that you love her, and realize you’d be lost without her, I began to realize that the complaint had validity. And I began to actually imagine in my mind this unicorn straining to pass some glitter. And I realized that there was something wrong with the way Christmas is celebrated these days. Christmas has become – increasingly so over the last century or so, Christmas has become an exercise in nostalgia. By that I mean, it’s an exercise in trying to reclaim a lost place in a lost past, a time in which we knew ourselves as completely loved and at home.

Oftentimes, this idealized vision of Christmas kind of reinforces itself every year, so that we feel as if we have to somehow reclaim that Christmas of yesteryear, even if we never experienced it ourselves. When I was a little boy, it was a common tradition for us to gather at my cousin’s house and watch The Homecoming, which is the original episode of The Waltons. It takes place in Virginia, in 1933, and it depicts this moment in which the father, John, is delayed getting home, and John Boy tries to somehow step into his shoes and to find him. And John Boy goes on all of these adventures and he never quite finds his father. But then, wonder of wonder, his father comes home with affirming gifts for everybody. And even though he spent his last paycheck, he tells Mrs. Walton, Olivia, “We will survive the winter on love”

And for some reason, my Italian side of my family found this nostalgic vision of America, in Virginia, to be incredibly powerful for them. It came to define Christmas for them. And this is quite odd because, you see, as I’ve grown up, I’ve realized that the Italian side of my family, if we had gone to Walton Mountain in real life, they would have probably chased us away. They probably would have been afraid that we would have set up a business or something. How did this rural Virginia family come to define Christmas for us?

And this happened for many people. You ask anybody these days – if I say, “Goodnight, John Boy,” you know what I’m talking about. They had an enormous influence because ‘The Waltons’ themselves were an exercise in nostalgia. ‘The Waltons’ were developed from a novel, by Earl Hamner Jr, that was written in 1970, and it was produced on television in 1971. It happened during a time of massive social change, incredible social inequalities, incredible shifts in the culture and awareness that we were no longer the peaceful, powerful people we thought we were, no longer the innocent people we thought we were. And the nostalgia of The Waltons somehow told us that things would be alright, that we would find ourselves safe and secure, and at peace, and at home, and we’ll find all of these things by looking into our past.

Now, nostalgia is powerful. Nostalgia gives us a sense of purpose. But nostalgia is also cancerous when it is asked to step in and take the center of our lives. And the problem I see with so many of our observances of Christmas is that it has become a kind of idealized nostalgic time that none of us could ever, ever recreate. And that creates a sense of frustration with Christmas, itself.

I’ll never forget the moment when I realized that my family would never celebrate the kind of casual southern intimacy of The Waltons. My brother happened to be named John. He was seven years older than I was, and I turned to him and I asked – I called him John Boy one day. He put me in a headlock and gave me nuggies. My family did not say goodnight to one another. My family had a kind of acrimony at the source of it. Our way of building  intimacy was having a knockdown, drag-out argument, preferably at Christmas dinner, over politics if possible, but religion is a good stand-in. And so we would end these meals with like, “Oh, to hell with you.” And I remember realizing, “This is not The Waltons Christmas.”

Over the years, I’ve come to ask myself, “Why am I letting The Waltons define Christmas for me?” And I’ve come to realize, in fact, ‘The Waltons’ themselves probably didn’t even exist. I mean, Earl Hamner, when he wrote the novel, at one point admits that the only thing that connected to his real-life family was the fact that they both celebrated Christmas. You see, the problem with nostalgia is it creates a longing for a time that never existed. And nostalgia, if it’s mishandled, can become a kind of poison to our souls.

Believe it or not, nostalgia was once a medical diagnosis before it became known as this cultural movement. It was based in the late 17th century – it was coined by a Swiss doctor, Johannes Hoffer, and it combined two words, nostos, which means homecoming or arrival, or yearning for home, and algos, meaning pain. Nostalgia. And in the American Civil War, there are 74 documented cases of soldiers dying from nostalgia. You see, the idea of home was so powerful to them that they found being away from home being completely debilitating, disorienting. They lost their will to live.

And many of these soldiers died even if they returned to home, because when they got back home they realized that home wasn’t as they imagined it was, that things had changed, relations had changed, the world had moved in ways they did not expect, even during the brief time they were away.

Christianity and the Christian story, and the story of Christmas, is not an exercise in nostalgia. It’s not a romantic revisiting of the past. Christmas is about the present and the future. Christmas is about the way in which you and I hear the angelic announcement all over, for ourselves. For in our gospel, we read that the angel said to the shepherds, “Do not be afraid. For see, I am bringing you good news of great joy for all the people. To you is born this day, in the city of David, a savior who is the Messiah, the Lord. This will be a sign for you. You will find a child wrapped in bands of cloth and lying in a manger.”

So we are not revisiting a quaint story from the past, we are presenting, in real time, a story of our present and a story of our future. Because Christmas tells us that the joy of God is now yours, through Jesus Christ. Christmas tells us that because God was born in Bethlehem, it is possible for Christ to be born in you. That you can have a relationship with Christ that is not based upon the perfect representation of Christmas past, but by the new beginning of the Christmas present; by the relationship you have with God now, in Christ, by the new life that you experience when you realize that God has made you His own so that you might be Christ’s own forever.

And the question of the sign, is the question of where you see God and the world around you. Martin Luther, in the 16th century, when he was writing about this passage from the gospel, said that the important thing to note here is not only that there is this moment in which the shepherd is addressed, and not only when – in the moment in which we are addressed with the “you.” But he said the most important thing for us to note, is this incredible movement and power of being made Christ’s own, and being brought into the life of God, so that the love, and joy, and peace, and goodwill become ours to give as well.

May you find the face of Christ in this new year and on this Christmas. May you experience new birth in your life. May you find the joy that is yours, the birthright that God returned to you through his graceful son, Jesus. And may peace be among us, and peace be around us, and may we become servants of the gospel of peace. Amen.