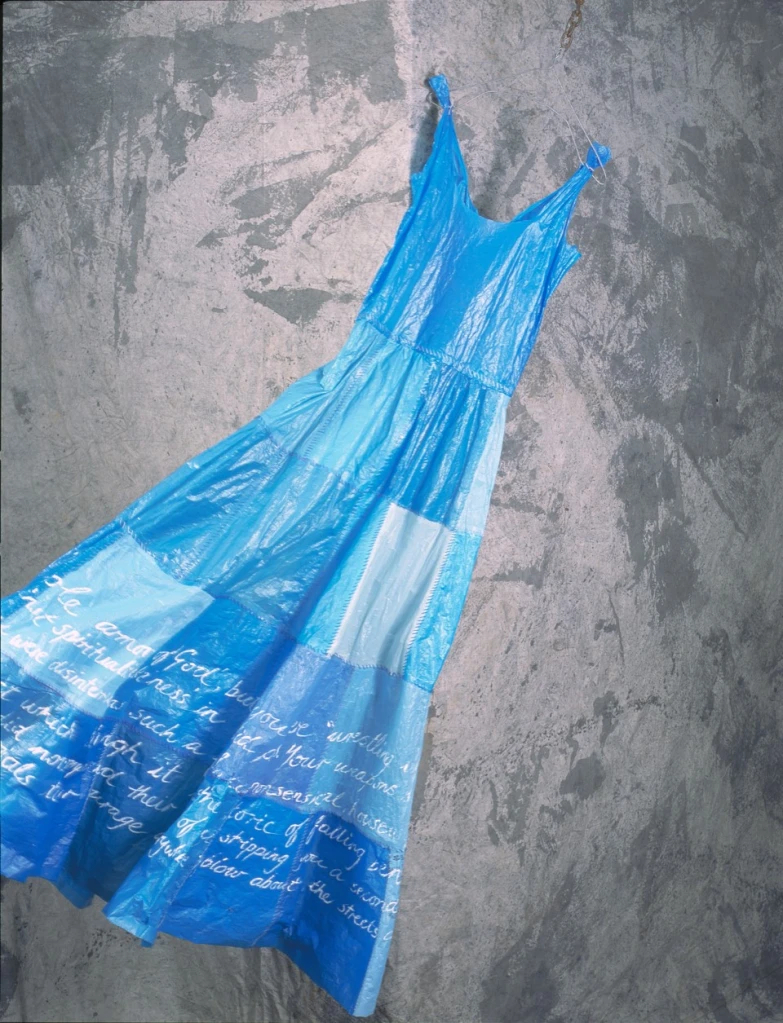 The Thirteenth Sunday After Pentecost – 8/22/2021 This sermon has been transcribed from a live video. To view a video of this sermon, please click here.

A few years ago, I was traveling in South Africa and I came upon an art piece that I want to begin with today. It’s a series of paintings in an installation, a kind of soft sculpture by an artist named Judith Mason, who died in 2016. And this art piece is found on the cover of your bulletin. And for those of you at home, I’ve placed it up right next to me.

This piece of art sits right outside the court, the Constitutional Court of South Africa in Johannesburg. It’s commemorating the death of a freedom fighter for the resistance against apartheid, named Phila Ndwandwe. Phila had been captured by the police forces and brought into custody. And the plan was somehow to get her to become an informant for the government and to turn on her comrades.

She refused to speak and so they stripped her naked and likely assaulted her and left her in her cell for three days. And during those three days, she found a shopping bag, a plastic shopping bag, the kind of shopping bag you’d pick up at the supermarket. And she made for herself some underwear to wear. They could not break her and so they decided to kill her. And so they killed her and buried her in a shallow grave.

And her story would never have been told without the Truth and Reconciliation Commission, because at that moment, when there was the promise of amnesty in exchange for telling the truth, some of her captors came forward. And they told the story of her captivity and her bravery and how she died. And they went and they found her body and she was still wearing the plastic bag for underwear when they disinterred her and buried her with honors.

Now the artist, Judith Mason painted several pictures of that plastic bag, but instead of making it just a piece of undergarments, she actually composed from real plastic bags, a beautiful dress, and she inscribed on the base of that dress the following inscription that you can see on the lower left part of it.

“Sister, a plastic bag may not be the whole armor of God, but you were wrestling with flesh and blood, and against powers, against the rulers of darkness, against spiritual wickedness in sordid places. Your weapons were your silence and a piece of rubbish. Finding that bag and wearing it until you were disinterred is such a frugal, common-sensical, house-wifely thing to do, an ordinary act… At some level you shamed your capturers, and they did not compound their abuse of you by stripping you a second time. Yet they killed you. We only know your story because a sniggering man remembered how brave you were. Memorials to your courage are everywhere; they blow about in the streets and drift on the tide and cling to thorn bushes. This dress is made from some of them. Hamba kahle. Umkhonto – ” which is Xhosa for “go well, warrior.”

Now I do not want to step back in any way from the powerful message of liberation and justice that this artwork celebrates and the incredible sacrifice that Phila Ndwandwe gave for country. And I do not want to flatten the complex statement that the artist makes about gender and silence and witness and violence in women. All of these things are incredibly powerful and important, but I want to invite you today to see something in this piece that has haunted me ever since, because when Judith Mason described her plastic bag and her silence as the whole armor of God, this was obviously a reference to our reading from the letter to the Ephesians.

And it caused me to rethink this passage. I’ve never read the Bible the same way – that piece and passage of the Bible the same way after seeing this piece of art, because in our reading, from Ephesians, we celebrate the encouragement by Paul that we should wear the helmet of salvation. Carry on us the breastplate of righteousness, the belt of truth, the shield of faith, the sword of the spirit and walk wherever the gospel of peace leads us.

And this metaphor is powerful because all of us experience, in one form or another, conflict and opposition and oppression and testing and trial and suffering. All of us need armor in one form or another, no matter who we are. No matter how privileged our lives are, all of us need armor to get through life because life is full of conflict. Life is full of struggle.

In our gospel today, Jesus himself experiences the struggle of going it alone when his words of promise about himself go unheeded and people drift away. And this passage from Ephesians – and particularly when viewed from the lens of that piece of art, this passage of Ephesians asks us to ask ourselves what kind of armor are we wearing and is that armor truly useful?

When I was growing up, I was picked on a lot. I had an older brother who was seven years older, and then I was at a school in which there was a lot of bullying. I was picked on a lot and I discovered a certain part of my armor. It came to me almost as a bit of surprise. I realized that I was big and that I just had to develop my body a little bit and become strong, and then I would be defended.

I will never forget the moment when suddenly those two things came alive to me. One of the tougher kids in school decided to pick on me and I decided it ends today. It made news and I remember that day well. That physical size and that strength is something that became part of me. It became my armor. And it served me well for a time, but any time you put on armor of one sort means that you tend not to put on armor of another sort. And so, one of the things that I’ve had to deal with in my life is weakness. And part of life is learning to be weak because there is a kind of connection between vulnerability and intimacy. And if we want to be intimate, we have to learn to be vulnerable. And that’s hard to do when the only armor you know, the armor you’ve chosen is strength.

Later on in life, that armor of strength became a kind of armor of my intellect, my education. I used that to defend my faith. It served me well for a time and I am proud of the work I’ve done to become better educated. But that tendency to intellectualize, to find a way to control things through my intellect, that kept me from actually entering into emotional relations. And it kept me from developing empathy in the way that I should.

In psychology, there is a method of thinking about how you recover from trauma called the inner firefighter. This is the belief that part of the way that you deal with trauma is by developing parts of yourself that respond immediately to the crisis, your little inner firefighter, who comes to the rescue and sets things right, and puts out the flame. And one of the ways you heal according to this theory is by saying to your inner firefighter, thank you, and then allowing it to go into retirement. If you always have a little firefighter responding to every perceived crisis, you will make yourself miserable. The trauma that you’ve experienced will continue to compound and determine your life.

What is said here about a firefighter can be equally said I think about armor. Each of us has armor and the examples I’d given of strength and intellect, these are only the most obvious things in my life. Each of us wears a suit of armor that is carved and intricate and engraved and beautiful much like those Renaissance suits of armor that you see in a museum. And yet, sometimes that armor can fail to serve us well and keep us from becoming the person God wants us to be, the person that is emerging.

And when we are faced with these things, we have to realize that taking off that armor sometimes happens when you are in the midst of a crisis, and you can’t be strong anymore because you’ve become physically weak because of disease or injury. But truly to take that armor off requires a deliberate act of prayer, self-reflection, and finally, even letting go. And experience has taught me that when we let go of those things, we can find our way to the armor of God.

And as much as we want to enter into this passage, maybe like we used to do in Sunday school where you’d make a little tin-foil hat to represent the helmet of salvation, we all need to see that when Paul speaks about the helmet of salvation or the breastplate of righteousness, the belt of truth, the shield of faith, the sword of the spirit, and the shoes of the gospel of peace, that these are just illustrations for some inner work that we all have to do.

The one thing that I want you to see is that that armor of God is not something that creates a self-contained individual soldier. In fact, the armor of God is built in relationship for each of the pieces that Paul describes speaks of a relationship with Christ. For what is salvation but Christ cleaving to you and keeping you alive? What is righteousness but Christ closing with you and covering your heart? What is truth but Christ holding you together and allowing you to move? What is faith but Christ living in you? And what is the spirit but Christ empowering you to act? What is the gospel but just carrying the news of Christ wherever you are called to go?

Earlier this summer, my youngest child, Rose, wanted to work at a local supermarket. So she applied and I was kind of terrified because she had struggled with anxiety and depression and I was afraid that the job would be too much for her. But I realized I had to let her go. There would be things that I could not intervene in and things we would find out, and so she went. On her first day as the assistant to the cashier, a woman came up to her and introduced herself and said that she had been a cashier for 30 years. She said to her, I will be your work mother. So she has looked out for her.

The other day Claire came to Rose for lunch. They were sitting in the little cafe there and Rose’s work mother went to eat by herself. Rose said, “Would you like to sit with us?” So she did. And I realized in looking at this and praying about that little exchange in the context of this passage from Ephesians that she was given and wearing the armor of love.

May that be armor enough for you. May you have strength to move into the person God is calling you to be. For the armor of God is not a marvel of technology like Iron Man, but a marvel of transformation.